Female fitness is now normal. But that wasn’t always the case…

It may be hard to believe but it’s been a quarter of a century since the first women’s international weight lifting competition. At the time, this was considered a massive leap of faith. Up until that point, it was not considered that women would venture and compete in areas with such male domination.

The history of female strength performances can be traced all the way back to the 19th century. There are even mentions by scholars of female athletes going even further back to the 1800s.

A woman names Katie Sandwina became popular in New York in the 1900s due to her feats of strength.

Katie Sandwina could lift 200lbs in the overhead press and lift her husband one-handed.

Most of the early promoters of the female powerlifting arena were from Canada, the USA, UK and Australia. It could be considered that this was assisted due to the feminist movements taking place at the time. It was also assisted by the legal system so that women were not treated differently. Female athletes wanted to compete, but not with men because they also want to have a chance of winning, of course. 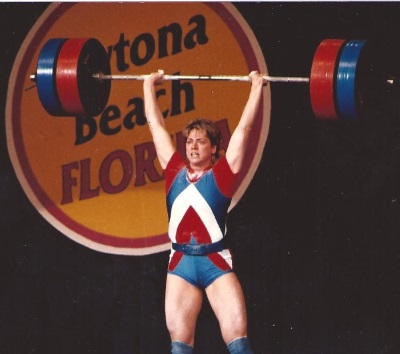 In the beginning, many people thought that the performance of the female athletes would never reach a high level. Each spectator had their own opinion of how high that level would be. It turns out that many were wrong, especially when Karyn Marshall from the USA lifted more than 300lbs.

At the time, she was well ahead of anybody else in the 1987 championships and so many people made the assumption that she had reached the maximum that any woman could possibly lift. This achievement was greater than any other female lifter in history and hit the Guinness book of records. Because Karyn was tall and weighed 82 kg, it was widely assumed that nobody in the lighter weight categories would get anywhere near what she had achieved. Nobody expected any woman to ever clean and jerk a weight of 400lbs, it seemed impossible.

But if you take a look at the records, they went even higher. Even women in a much lower weight category (58 kg) broke the 300lbs clean and jerk record. In fact, at that point, Karyn Marshall’s performance would have landed in 10th place instead of first. Competition forced all of these weightlifters to new levels. Karen Marshall later gained further success with CrossFit and masters lifting.  Also looking at Karyn’s belt in this picture, you can see how womens weightlifting belts have also progressed.

The progress has not only come from the athletes, however, as a change has occurred more recently for officiating. Currently, each referee team must consist of four referees. These are three active referees and one reserve which are rotated for each session. So there is nothing new there except for that the referees must be women. So with these rules, any group can handle a weigh-in and sex is no longer an issue.

As well as this, the International Weightlifting Federation executive will co-opt a female on the team if one is not elected. This way a female voice is heard in all of the executive meetings and their opinions must be considered. There are quite a few women that are serving in the IWF at a committee level. These are steppingstones to a high position in the organization so there are many opportunities.

In the area of coaching, things have been a little more uneven between male and female powerlifters. It is speculated that this is due to the lives of the athletes who can coach. After some time training in their younger years, just like male lifters, a may need to make up for lost time such as with a family or career. So this leaves little time for becoming a coach. So much of the time this is the end for female lifters. It is always possible that they can return later in their lives but making a re-entry into any sport after taking time off can be difficult. But outside of the professional arena, we can see the numbers of strength coaches who are female increasing.

So in the last quarter of a century, there have been amazing achievements in the world of women’s weightlifting. It is no longer something forced for sexual equality and is now respected as part of the Olympics and ambition for many girls to become a professional athlete.  Check out the rundown of our top weight belts for females.