What Is The Purpose Of A Weight Belt? 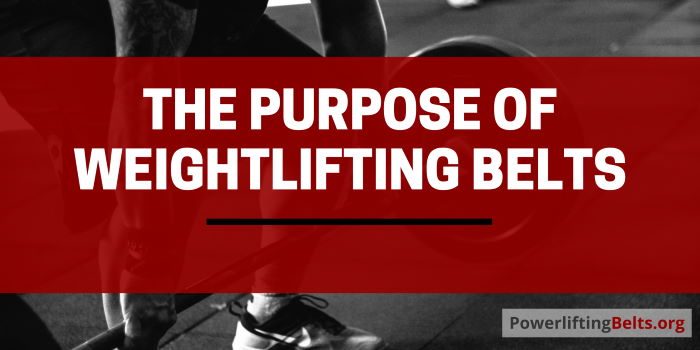 We’ve all seen lifters on TV, on YouTube, or in the gym wearing a belt.  You may have seen some guys doing completely inappropriate exercises while wearing one… like crunches.

This is often one of the biggest causes for argument and debate in the gym… Some may claim that they essential while others might say they are a crutch and hide weakness.

While belts were traditionally limited to powerlifting and Olympic weightlifting, they have recently become more common for recreational lifting.

Many people believe that weight belts are used to support the back and help to reduce the chance of injury.  This is quite true, but a better understanding will change how many people use this kind of equipment.

Actually, it’s quite obvious that some gym belt manufacturers don’t understand how a belt should work, as is shown by some of the belts that they produce.  Also, contrary to what many people think, the width of the belt at the rear actually has very little to do with the function of a belt.

The Benefits Of A Weight Belt

There are reasons that powerlifters use a weightlifting belt regularly. That’s because they can offer many benefits for intermediate and advanced lifters. In fact, at a certain amount of weight, you will need a belt to lift it in a safe manner.

Here are some reasons why powerlifting belts are used:

Reduced Stress On The Spine & Stabilizes The Back

A large part of the purpose of a weight belt is about pressure and breathing.  People are often taught during their gym inductions to exhale as they lift a weight and inhale when they lower it. And while breathing is necessary (of course), this method is not the best when a large amount of force and stability is required. Particularly when wearing a powerlifting belt. 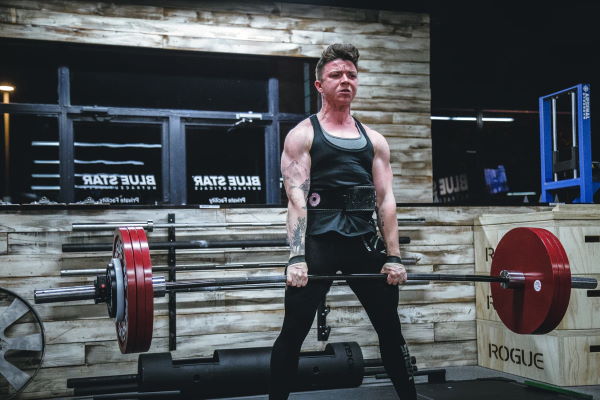 A belt helps to increase intra-abdominal pressure by over 40% which in turn reduces compression within the intervertebral discs by up to 50%. This causes a big reduction in pressure on the lower back by supporting it from the inside. The abdominal muscles push the back from the outside. These 2 forces create stability within the spine and thus reduce the stress put upon it when lifting.

Studies have shown that wearing a lifting belt reduced spinal extension (bending backward), spinal flexion (bending forwards), and lateral flexion (bending sideways). By reducing these, it forces you to lift with your legs with flexion in the knees and hips. This is the correct position that should be used when lifting heavy. Using this correct form also forces your legs to adapt and increase in strength.

The pressure and stabilization created from wearing a belt correctly means that serious injuries can be prevented. As most injuries to the lower back occur during rotation or flexion of the lumbar spine, by forcing you to use a more correct form when lifting, there is a reduced chance of injury when strength training.

Simply put, weight lifting belts allow you to lift more. Generally, you expect to lift around 10% more when wearing a belt without a belt. Some research studies also suggest that using a lifting belt for squats increased quadriceps muscle activity. This means that muscle growth in the legs is promoted.

This is also useful for breaking plateaus. Adding a belt is a quick way to increase your one-rep max withing just a few workouts. The feeling of stability in the midsection also makes you feel mentally stronger, helping to beat mental plateaus too.

When You Should Not Wear A Belt

There are many scenarios when you shouldn’t be wearing a belt. Here are just a few:

You Don’t Have Good Form

If you haven’t been training for a considerable amount of time using the correct form, you shouldn’t use a belt. They are not for beginners. When you see powerlifters using a belt, they will be lifting with near-perfect form after many training sessions without a belt to strengthen their core muscles.

So until you’re lifting heavy without a belt and with good form, you should avoid using one.

No Deadlift Or Squats

Weightlifting belts have benefits for many types of lifts. But where they excel is the squat and improving your deadlift. These are exercises that anyone who is serious about their lifting should be doing. So if you’re using machines for all of your workouts rather than free weights, you don’t need a weight lifting belt.

Even lighter movements such as using kettlebells or dumbells when strength and conditioning training won’t get much out of a belt. They should be used for compound movements under heavy loads.

If you have high blood pressure or a hernia, you should avoid making use of a belt. A powerlifting belt can make these issues significantly worse. They can even cause old injuries to resurface. So be aware!

Normally, when someone moves something heavy, such as a piece of furniture, they take a big breath, push or lift while holding their breath, and then only breathe out when the movement is complete.  This is known as the Valsalva Maneuver.

When performing some exercises at our best effort, holding your breath increases your abdominal pressure and braces you, allowing you to lift more weight.  This is why you always see a professional powerlifter holding their breath and not ever exhaling while performing heavy lifts.  See below:

Inhaling increases the pressure in the thoracic cavity and this pressure further increases when flexing the abs.  And in short, this pressure keeps you from being crushed by a heavy weight when you squat. When performing squats,  muscles in the back apply force and support the spine from the outside while the abdominal wall and extra pressure from deep breath support it from the inside.  A belt’s main purpose here is to add support from the front by increasing intra-abdominal pressure (IAP). 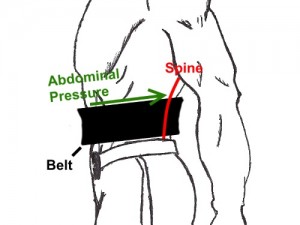 A good analogy for IAP is the box containing a balloon example.  If you stack some weights on top of the box, at some point it will collapse.  If you strengthen the box, you can probably stack a few more weights on and it will collapse.  If you get a strong balloon and fill it up and put it in the box, it will support the box internally allowing it to support even more weight.  The balloon is what we would call our intra-abdominal pressure.

So basically, a belt provides something for your abs to push against.  This additional force with a limited amount of space means that an increased intra-abdominal pressure can be applied to the spine which will help to stabilize it.  This will give you a more solid torso and better application of force from the hips to the bar.  As well as this, it can provide a more stable overhead press.