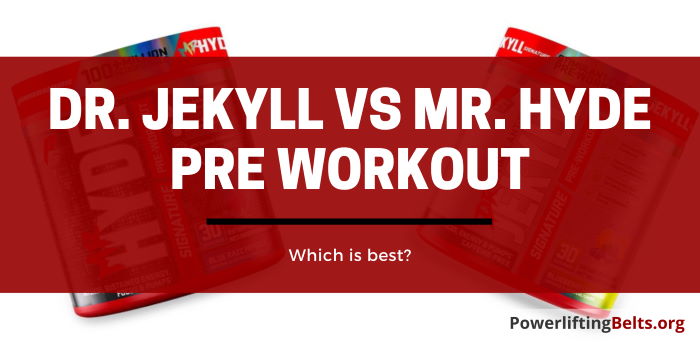 In today’s fitness world, there are a few ways to maximize your workout effectiveness that actually work. Pre-workout supplements exist to give your body the nutrients that it can use to maximize your performance while pumping iron in the gym.

But which one is better? Is it better to take Dr. Jekyll or Mr. Hyde before a workout?

To answer these types of questions, I have put together this comparison review to show which pre-workout supplements do what and which might be the best option for you. 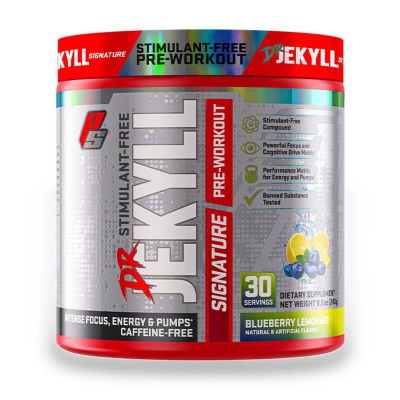 Dr. Jekyll is marketed as a thermogenic and stimulant-free pre-workout designed to work by supporting a number of processes in the body.

There are 2 slight variations of this product: the original Dr. Jekyll and the signature version. They pretty much have the same ingredients and in the same amounts. The signature version replaced Lions Mane with choline bitartrate and also swapped Alpina galanga with Panax ginseng. So there isn’t much difference to be expected between the formulas.

The Dr. Jekyll compound is claimed to improve pump and focus without stimulants.

It attempts to increase blood flow to the muscles for more endurance before workouts. That is why the manufacturer calls Dr. Jekyll a pump supplement. They say it is useful for strengthening your muscles to get a good pump while lifting weights.

The Dr. Jekyll stimulant-free formulation also contains nooLVL. This is a compound created by Nutrition21 and is aimed at eSports and gamers for better cognitive performance. This is one of the reasons that is it marketed as a good pre-workout for focus.

It also contains the standard ingredients of creatine and beta-alanine should offer better performance and endurance.

As far as the claimed thermogenesis goes, the only ingredient that will do anything like that is Aframomum melegueta, also known as grains of paradise or alligator pepper. This African spice is similar to ginger may be related to and an increased metabolic rate and therefore fat loss. However, research has shown that is only really effective when used in conjunction with cold therapy.

These types of pre-workouts without caffeine are useful for those who aren’t caffeine tolerant of gym-goers who workout nearer to bedtime.

Dr. Jekyll has 3 main matrices that contribute to its effectiveness: the performance matrix, cognitive matrix, and adaptogenic matrix. 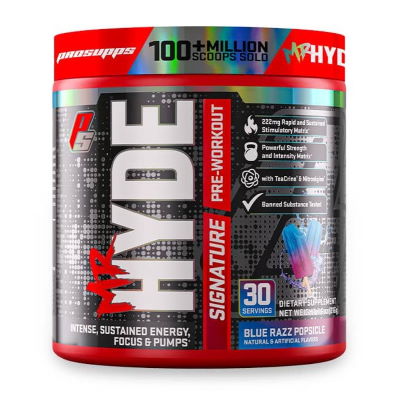 While Dr. Jekyll is aimed towards good muscle pump and focus without stimulants, Mr. Hyde is designed to offer higher amounts of energy.

Mr. Hyde contains a blend of 3 types of caffeine stimulants including caffeine anhydrous, di-caffeine malate, and caffeine citrate. Altogether, this gives a total out to 420 mg per serving. That’s even more than The Curse pre-workout! As such, Mr. Hyde gives you insane energy but it can be a bit too much if you are sensitive to stimulants.

Mr. Hyde has 3 major blends that make it up: the strength matrix, intensity matrix, and stimulatory matrix.

Dr. Jekyl vs. Mr. Hyde: Which is Better?

As you can see, Dr. Jekyl and Mr. Hyde share a lot of the same ingredients. Both contain ample quantities of choline, beta-alanine, and tyrosine. These three ingredients work to improve muscle endurance, mental concentration, and alertness/focus.

If you are familiar with the original story of Dr. Jekyll and Mr. Hyde, these two supplement names kind of make sense with the characters… Dr. Jekyll is more stoic and thoughtful while Mr. Hyde is high in energy and ready for action.

A single serving of Mr. Hyde contains about equal to nearly 5 cups of black coffee. That is a ton of caffeine and while it can give you huge amounts of energy, the comedown from that much caffeine may be really rough, especially if you are sensitive to caffeine.

What About Using Both?

Dr. Jekyll and Mr. Hyde certainly sound like they are meant to be taken together, after all, that is kind of what the original story was about. But is this a good idea to take both at the same time as a pre-workout stack?

Think of it this way, if you take both Dr. Jekyll and Mr. Hyde before workouts then you will be ingesting almost 500 mg of caffeine, 50mg of theacrine, and 5 grams of beta-alanine. That is a lot of stimulant power so while you definitely can take them together, I would advise caution.

You should probably take only half of the recommended dose for each product if you are going to mix them together.

Ensure you get the same flavor in each if you mix them together. This will ensure that you get a pre-workout with a good taste.

Both Dr. Jekyll and Mr. Hyde may have side effects. The most commonly reported side effects for the two are:

Most of these side effects are fairly common for workout supplements and are nothing too serious. Taking too much caffeine can cause serious jitters though, so be careful.

Both Dr. Jekyll and Mr. Hyde are good pre-workout supplements and will serve you well individually.

The main difference is that Dr. Jekyll is meant for a more all-around pump stimulation while Mr. Hyde is meant to give you crazy amounts of energy. So you should pick the product that best fits your workout routine and stimulant tolerance.